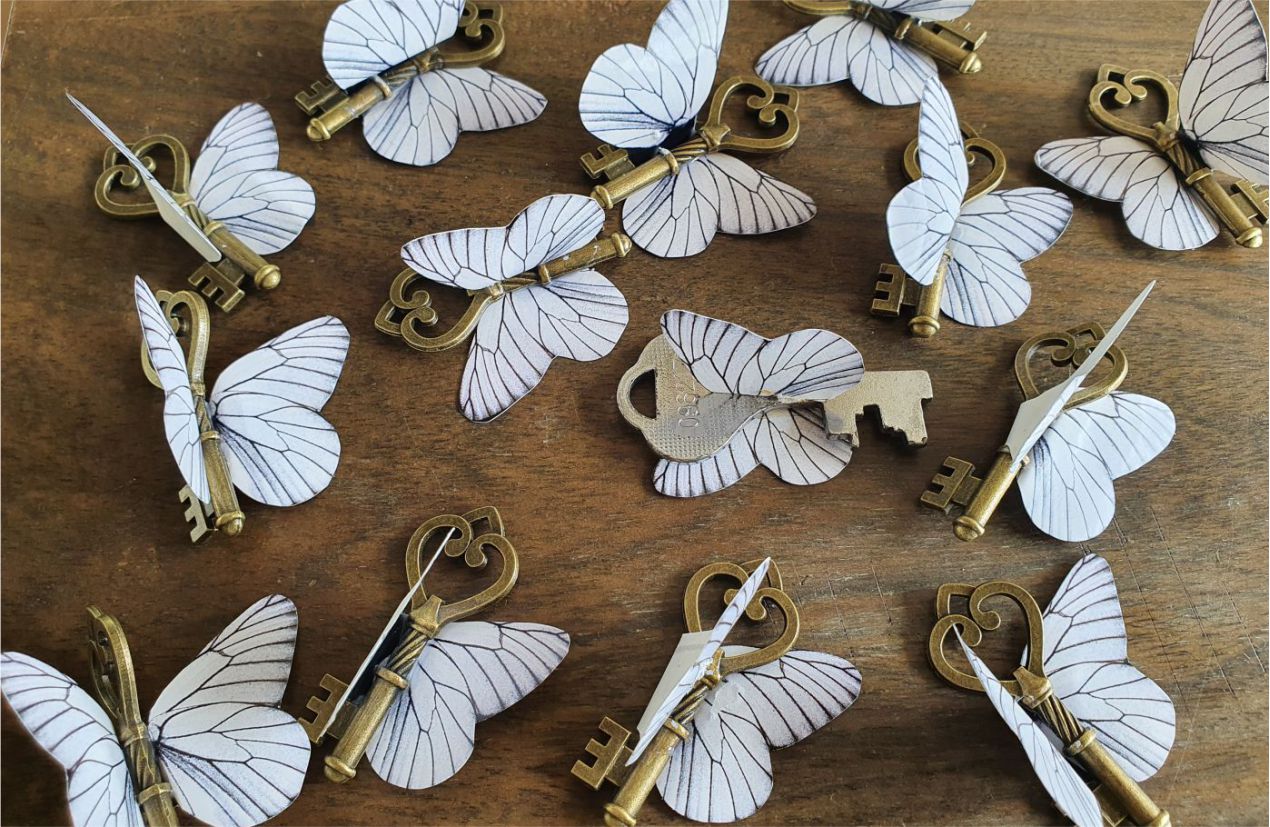 We had 8 lessons (games) in total, so it was a jam-packed party but somehow I didn’t hear anyone complain. 🙂 We had potions, care of magical creatures, history of magic (twice), quidditch, transfiguration, charms and defense against the dark arts.

If you are planning your Harry Potter Party, see the ultimate Harry Potter Invitation -delivered by owl- here.

Scroll down to get all the information you need for a fun-filled Harry Potter party and get lots of free templates to download too.

Let’s start with the timetable. I printed it in A3 size and hung it up at the party so everyone knew what lesson came next. I purposely started with the less action-packed game (history of magic) and finished with the messiest one (potions). Download the template for the time table here: Hogwarts Seal Harry Potter 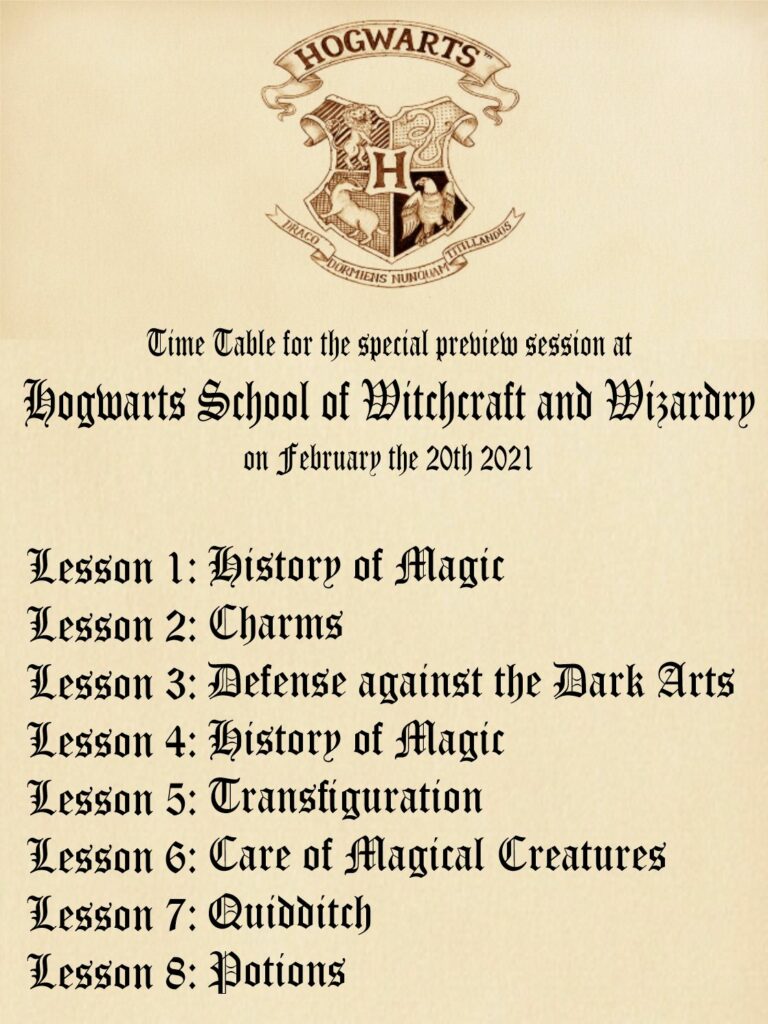 But before the games could even begin, we had to do the sorting into Hogwarts Houses as tradition dictates. 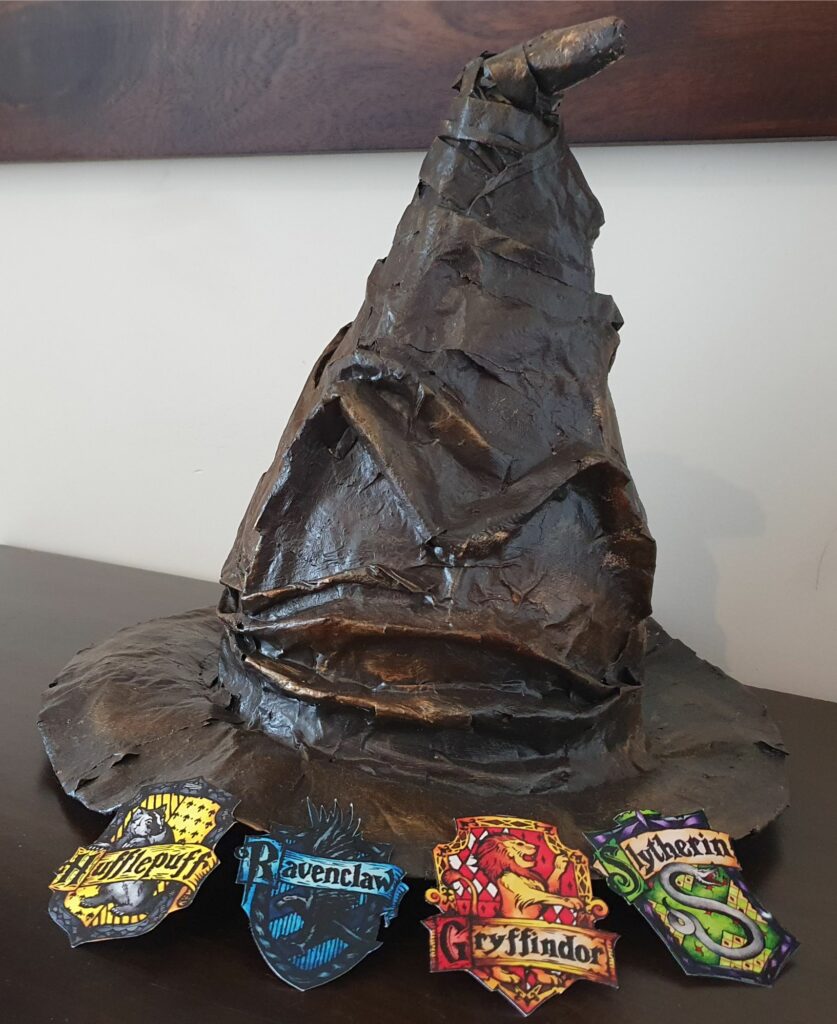 We made a papier-mâché Sorting Hat (or actually 2!) to help us sort the party guests into their houses. See this post on how to make your own with (or without) the kids. It is a bit messy to do anything papier-mâché with smaller kids, but also really fun and creative. Unfortunately our hat couldn’t sing and talk (!!), so we printed stickers for each house and kept them in the hat. Ask each guest to draw a sticker and that way they are sorted into the houses. You can also easily use a bought witch hat like this one from amazon.in.

The party guests can wear the stickers on their clothes and if you have made Hogwarts school ties, then give them each a tie too. It encourages the team spirit and it also makes it easier for you to see what house they belong in. See here how to make DIY Hogwarts felt ties. 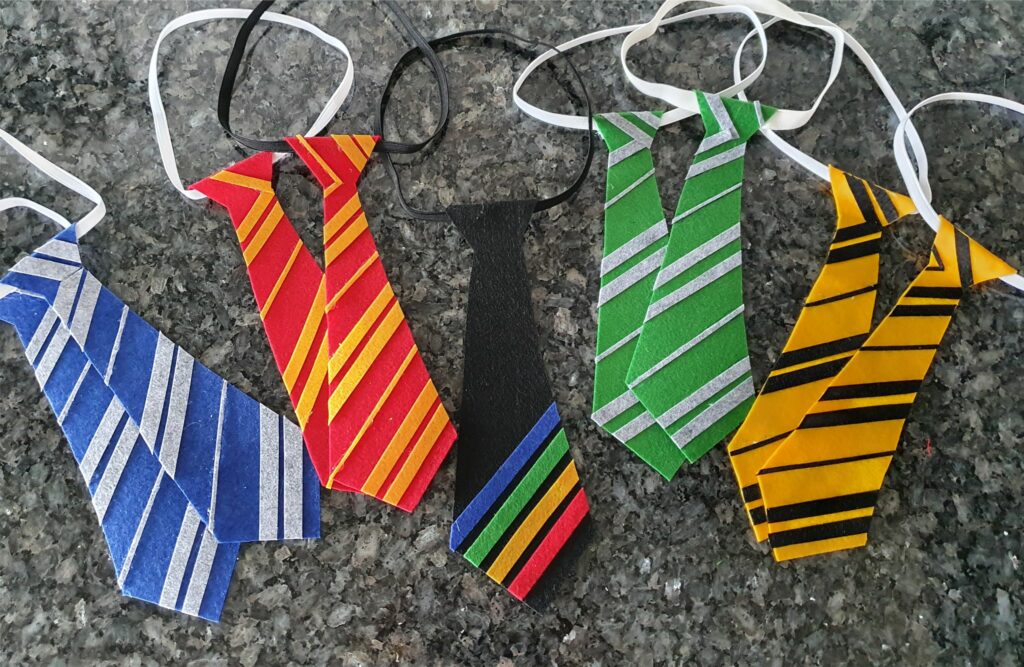 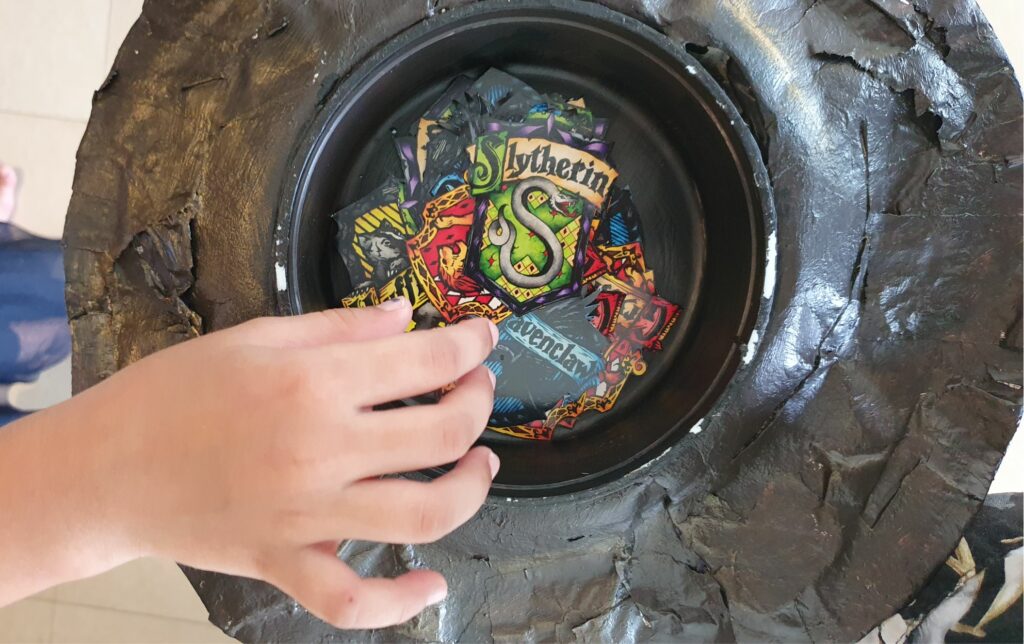 Let the kids draw a sticker each! I had turned the stickers upside down of course, but for the purpose of this photo, the Hogwarts Houses can be seen.

Next we needed a way to count the points. With no magic to fill the jars like the teachers, we had to find another way to keep score during the games. We used old honey jars and bought coloured garden stones to represent the gem stones described in the books. I used the same house stickers as mentioned above for these jars. The two lids are glued together, so it was easy to unscrew and add the points. Get the templates for the stickers here: Harry Potter Hogwarts House stickers FREE template

1 point for each word

10 points for the winning house

This was our first treasure hunt of the day (yes, we had 3 in total!). Do you remember the winged keys from the Harry Potter and the Philosopher’s Stone book that Professor Flitwick had charmed as part of the safety measurement? This was our tribute to that. I bought 20 old fashioned keys on amazon.in. (something like this -unfortunately I can’t find the link for the ones I bought anymore). I used any old silver key from home and printed butterfly wings to attach to the keys. 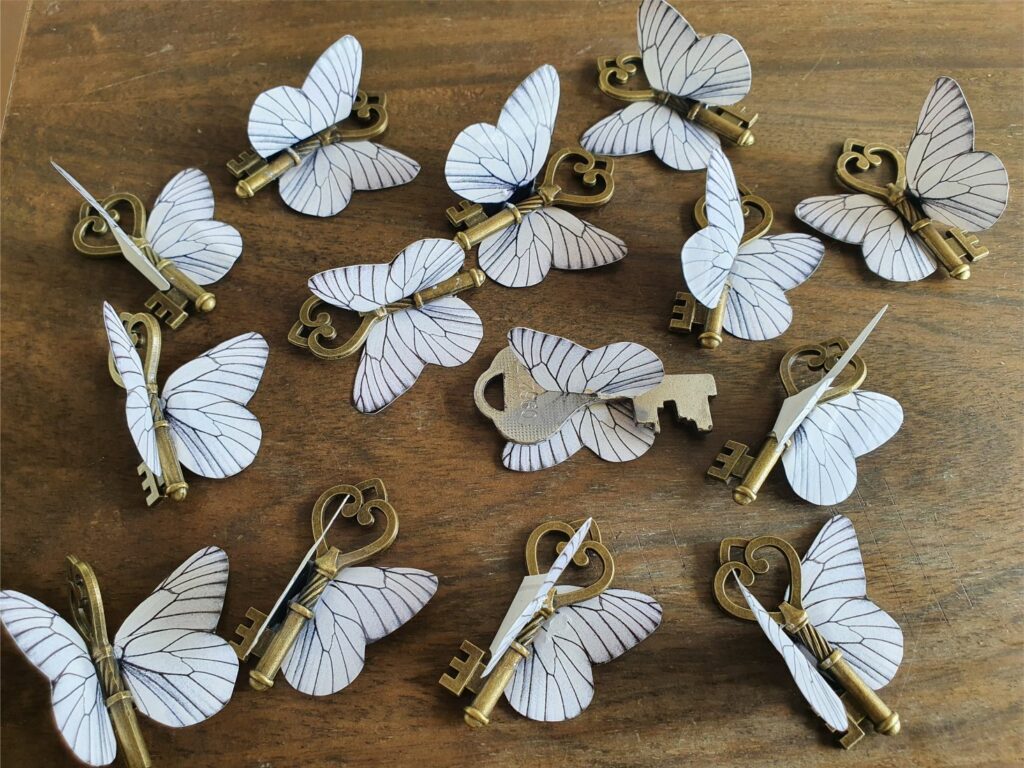 The game: The kids had to use the clues to find the winged keys. I had hung them around the garden and staircase. Once they collected a key, they got the next clue. The house that finished all the clues first, got the final clue to find the silver winged key. So it was a bit luck, a bit wit and also working together as a team. I found the clues online on google (please DM me for credit/removal). You could also make up your own of course, but considering everything we had to do, it was about keeping it as easy as possible. 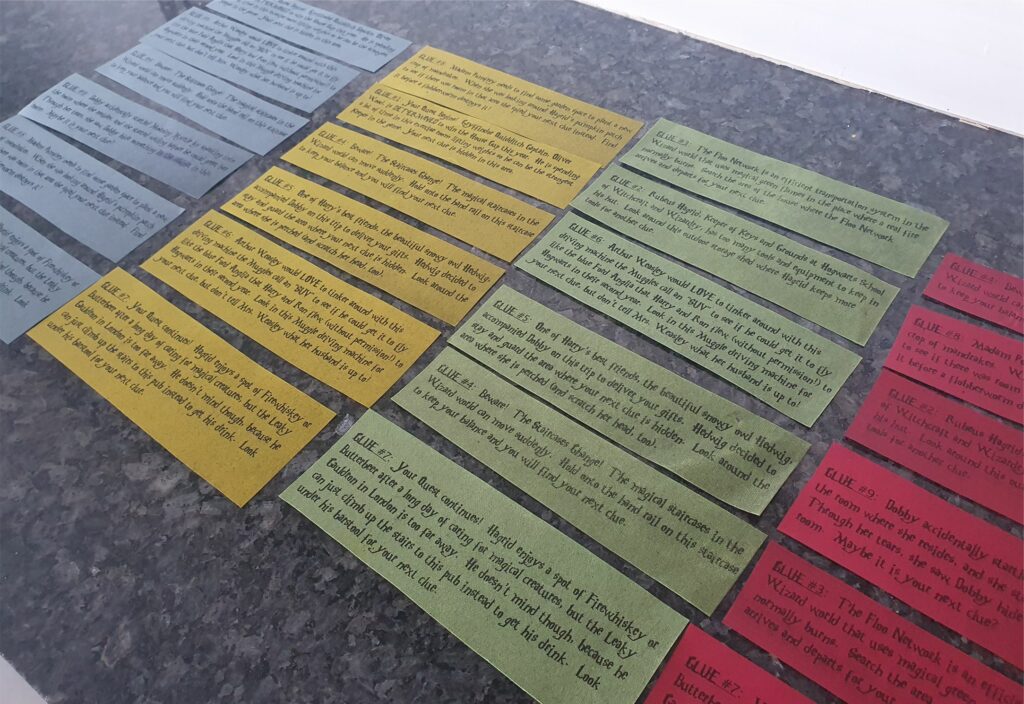 Lesson 3: Defense Against the Dark Arts

This was our tribute to the foolish Professor Lockhart, who released a bunch of garden pixies in his first Defense Against the Dark Arts class. We kept it simple and “released” a bucket of small bouncy balls. You can attach wings and paint them blue if you prefer. As much as I like to stay true to the theme and do everything correctly, we didn’t need to spend time on that. This game is really fast, but that also didn’t matter. The kids loved it and the preparations were easy. Just buy a bunch of bouncy balls (like these ones) and let them bounce all over the garden.

A quick game that may seem too simple for some. But it was hard for the party guests who weren’t so familiar with the books.

The game: Give every team a set of printed book covers. Say 1-2-3-go and let them race to finish putting them in the correct order first. You can also just write the names of the Harry Potter books on separate pieces of paper. This is the simplest Harry Potter game ever, but still fun and the kids enjoyed it. I found the book covers on amazon.in and just printed them from there.

5 points for the house that finishes first.

This is a again a very simple game, but still fun and in the spirit of a real transfiguration class. Minerva McGonagall would be proud of the creatures that can emerge from a simple piece of foil.

The game: Give every house team a piece of silver foil and nothing else! The kids then have to make any animal out of the silver foil as quickly as possible. They have to work as a team and think smart. Depending on the age group of the kids, you can give make it harder by saying only sea creatures, insects or mammals allowed. The kids will have to take a moment to think before they start, as the silver foil quickly becomes unusable if it’s been crunched up too many times.

Animals like snakes, birds, fish and so on are easier to make -but will the kids think of that?

No new pieces of silver foil are allowed if the first one gets damaged.

We all know and love the tiny nifflers who steal anything and everything shiny. Hagrid buries gold coins in the 4th Harry Potter book for the class to dig up, and we decided to do the same. Sadly we didn’t have any nifflers to help us but the kids didn’t mind getting their hands dirty 😉 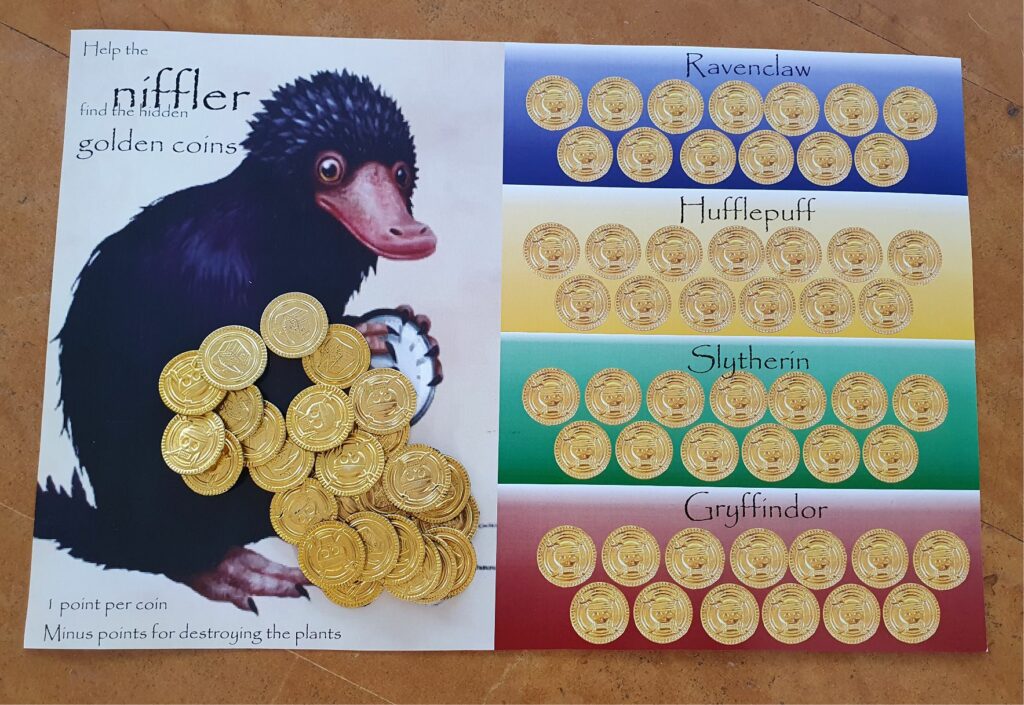 The game: I had a bunch of plastic pirate coins and I buried them in our flower beds -far away from any delicate flowers of course. Not too far beneath the surface but far enough to make it take 10-15 minutes to find them all. As you can see on the picture below, some of the coins were sticking out a bit for the smaller kids to have a chance of finding them too.

Another treasure hunt 🙂 This time with homemade golden snitches. I had made 10 small golden snitches and hidden them around the outside area. Here is a quick tutorial on how to make them. 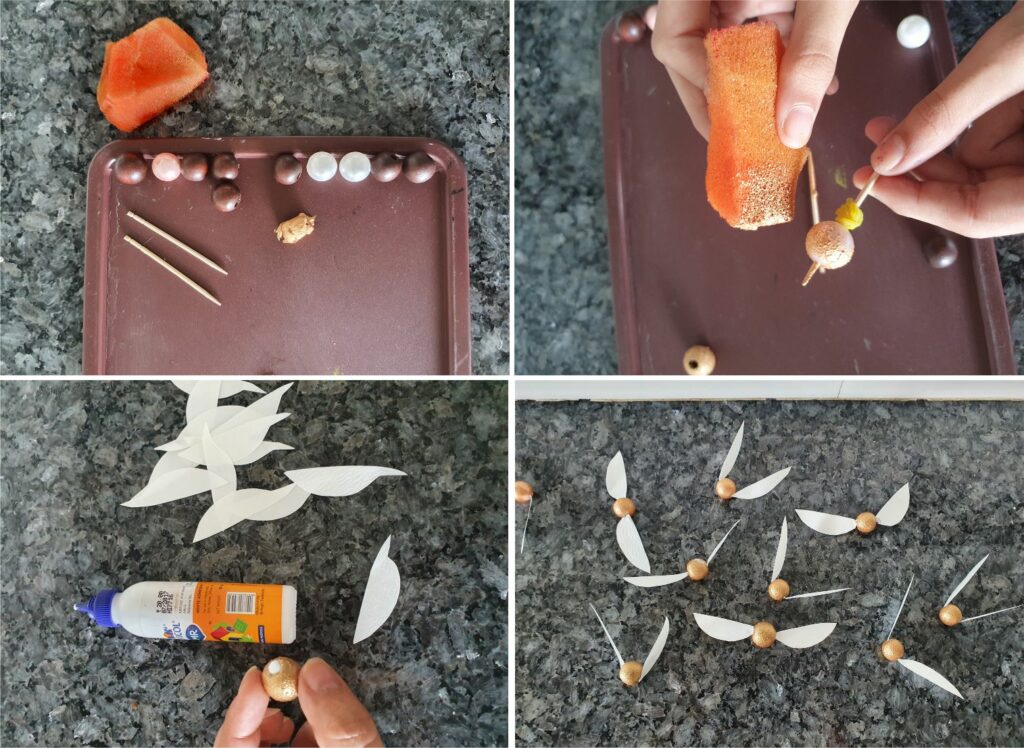 The game: Hide the 10 snitches really really well! And I mean really, really well -while still in plain sight. Kids these days can find anything in a jiffy and this treasure hunt should ideally take more than a few minutes. I am sure you also need a break

I hid them inside the dog house, on the branches of trees, below window frames, on bicycles wheels and below frames. Make it really hard and it will surely be super fun. 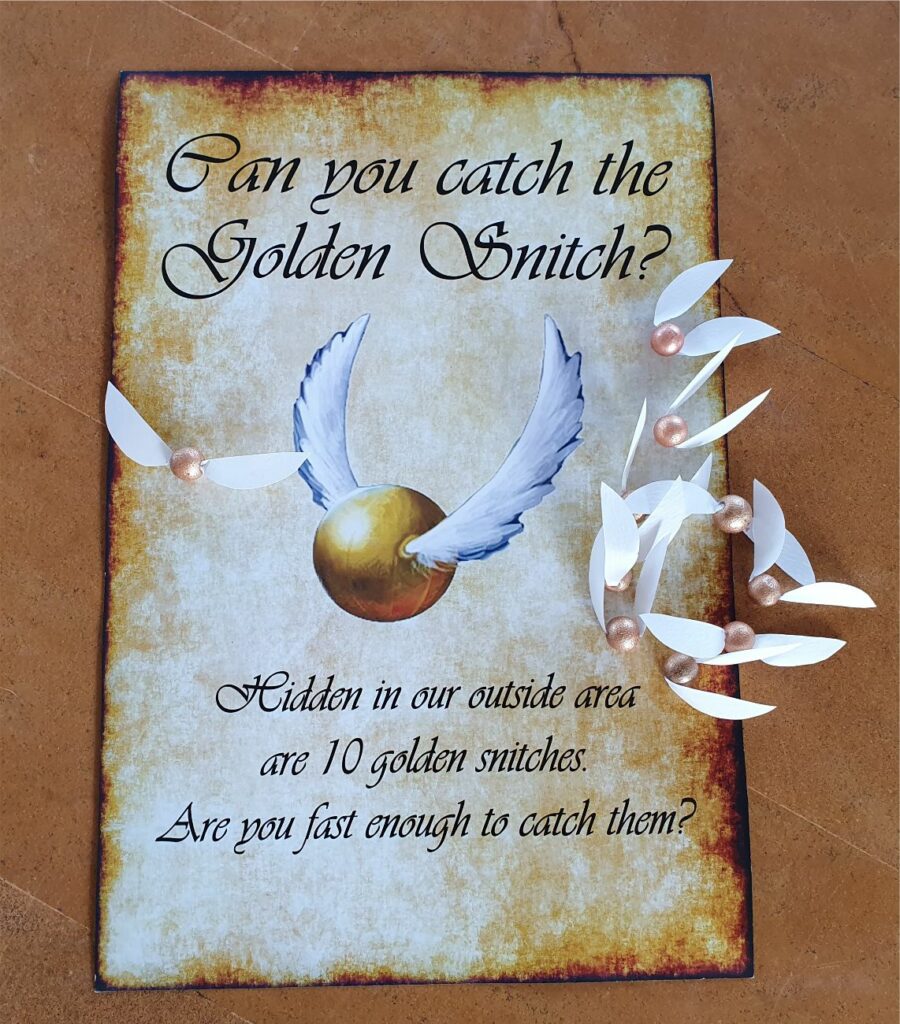 No points. Everyone got the potions to take home.

This last game was something completely different than the others and a perfect end to a great party. For the potions class we made homemade slime. Harry Potter style of course. 😉

I would only recommend doing this if you are having a party for 10-15 kids (or less) and only for kids above 7 years. It can get REALLY messy, so prepare with lots of newspapers or craft mats. Or -ideally- have the class outside on the grass where there is less clean-up afterwards. 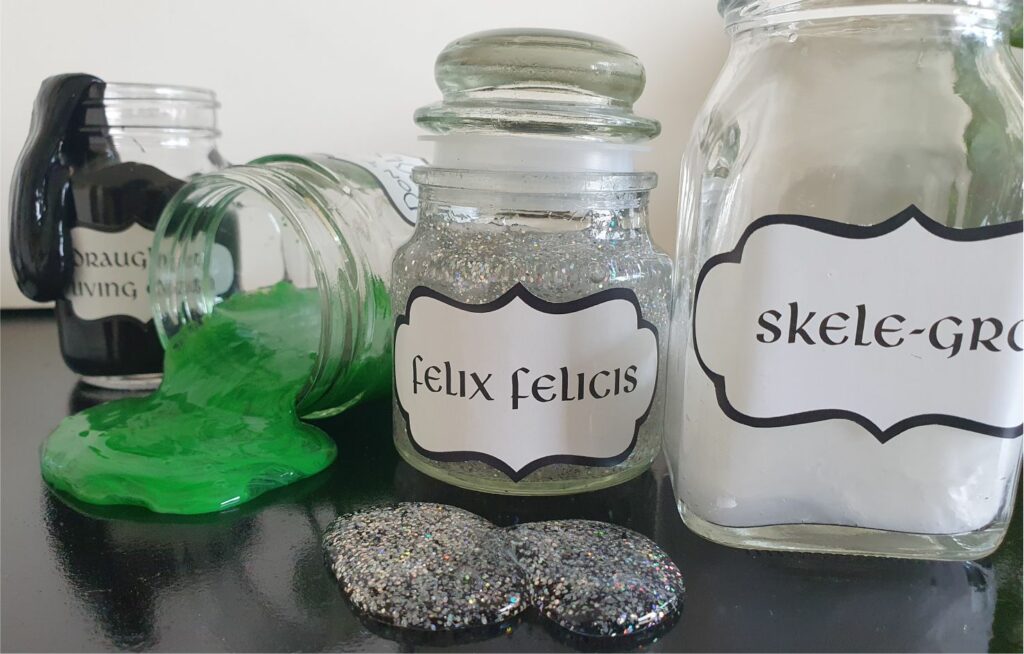 The game: Each house team got a bag containing mixing jars, measurement cups, paint, glitter, spoons, labels, solutions, a magic pen and of course a letter from the teacher. There was enough solution for each team to make about 6 portions of slime. 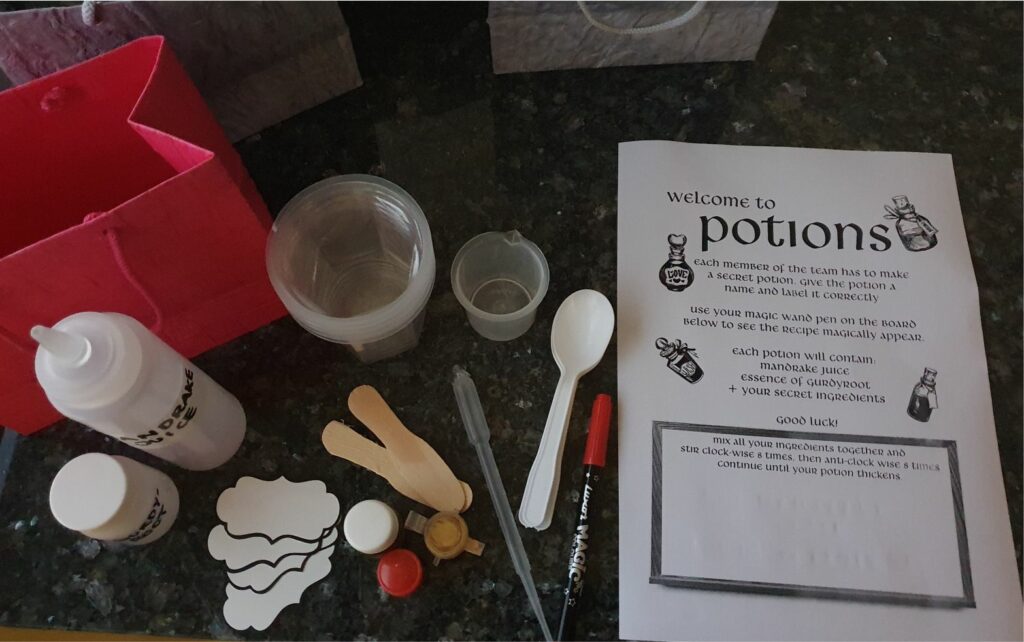 Potions with a magic twist

However, you may have noticed something missing! The measurements of the ingredients are not mentioned in the letter. So the kids had to use their “magic wand pen” on the blackboard to reveal the ingredients. It was a little added magic twist to a fun game.

The kids then used the clear labels to name their slimy potions. We got some imaginative names like “dancing potion” and “scary potion” from the kids. Who also says the names should be from the Harry Potter books? As a part of the return present, the kids took the slime home with them 🙂

The Ultimate Harry Potter Invitation -delivered by owl of course!